It was on the brink of bankruptcy

It was on the brink of bankruptcy.

Over the prior four quarters, the company incurred $1 billion in losses.

The company was Apple.

He recognized that Apple’s engineers were working on “interesting” projects.

But the work sent the company in too many different directions.

He got Apple out of side businesses.

The following January, Apple had its first profitable quarter in years.

And today, Apple, once on the brink of bankruptcy, is worth over $2 trillion.

Is your agency’s new business program focused on a target audience?

Or are you targeting several “interesting” audiences that take you in different directions?

What can your agency learn from Apple?

Where can you focus?

Where can you say no? 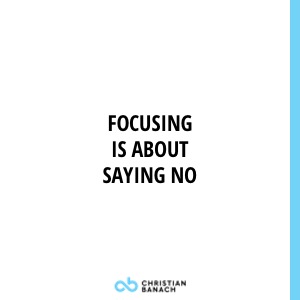