Many years ago, I became intrigued by meditation

Many years ago, I became intrigued by meditation.

After struggling to get started, I heard about the Zen Life & Meditation Center.

I wasn’t sure what to expect there.

Everyone sitting cross-legged on the floor chanting?

When I arrived, I was greeted warmly.

There was a Zen master but in ‘civilian’ clothes.

Some people sat cross-legged, but most in chairs.

The experience was positive.

Soon after, I registered for their mindfulness meditation classes.

I participated in group meditations.

And I even attended a 3-day silent retreat.

During my time there, I kept hearing an unfamiliar word, sangha.

In simple terms, a sangha is a community of friends practicing together.

Over time, I got to know Robert and June, founders of the sangha.

Their story is admirable.

The vision was to build a community aligned with their beliefs and values.

At first, they operated out of their home.

A sangha was forming.

Eventually, Robert and June could open a Center outside their home.

From the beginning, the two fused their passions into the sangha.

The Center has a gallery of his work.

The Center has a hula school.

Beyond Robert and June, the sangha grew on its own.

When the pandemic first hit, the sangha went virtual and now reaches an even wider audience.

It started with Robert and June’s vision, building a community around beliefs and values.

As I build my company, I want it to be more than a company.

I value health and wellness.

I believe in personal and professional development.

I want to make a positive impact on clients and the world.

Our next step on this journey is to help nonprofits learn to land 6- and 7-figure opportunities.

We will consult, train, and coach the exact process we use to drive growth for our clients.

But does this pro bono work take away from the company and our growth?

The mission will galvanize our team.

And strengthen team and client loyalty.

A sangha is much more than belonging to something.

It’s about doing something together that makes belonging matter. 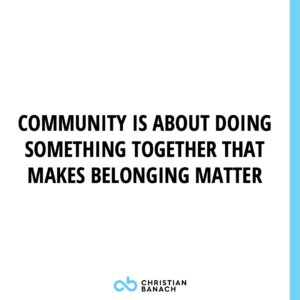