I don’t want to go practice

“I don’t want to go practice!”

My daughter Bianca complained about practices for her upcoming performance in “Charlie and the Chocolate Factory.”

But it was only Bianca’s first theater performance.

She thought about quitting.

We agreed she would continue through to the performances.

After that, she could choose never to do theater again.

To her credit, she stuck with it.

After the final performance, I asked Bianca what she thought.

Would she join another production?

I suspected the answer was no.

But to my surprise, she said she loved it.

Yes, the practices were mundane at times.

But the excitement of the live performance and audience was thrilling.

Her situation was similar to Charlie’s.

In “Charlie and the Chocolate Factory,” the eccentric Willy Wonka creates a contest.

Five winning children get to tour his magic chocolate factory.

Wonka establishes rules for the tour.

But four of the children succumb to their own character flaws and break the rules.

He savors every invention and room in Wonka’s factory.

Charlie doesn’t focus on his own wants and whims.

At the end of the tour, Wonka reveals there’s a secret contest.

The prize is ownership of the chocolate factory, which Charlie wins due to his patience.

Similarly, if Bianca had given in, she wouldn’t have experienced the thrill of the live performances.

We can learn from Charlie and Bianca.

New business for agencies and martech companies is a grind.

When they don’t see them, they pull the plug too soon.

Then they either do nothing or start something else new, only to pull the plug on that prematurely too.

Patience is bitter, but its fruit is sweet. 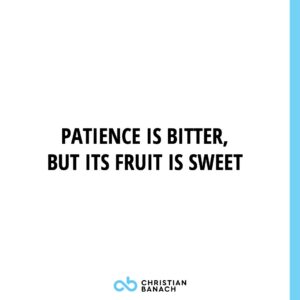