Growing up, I wanted to be a pro baseball player

Growing up, I wanted to be a pro baseball player.

In 4th grade, I knew where I wanted to go to high school.

The school was an annual contender for the State Championship.

I convinced my parents, and that’s where I went.

Our team at Driscoll was dominant.

By senior year, I was captain, and we were nationally ranked.

We would win the State Championship, fulfilling the mission I had 8 years earlier.

But the bigger goal was going pro.

The next step was college ball.

The University of St. Thomas in Minnesota recruited me.

But once I got there, something was different.

I had a hard time adjusting to being on my own.

After the first semester, I left.

I lost the scholarship and never played baseball again.

Years later, curious, I Googled to see how the team fared.

There it was, St. Thomas, 2001 National Champions (the year I’d have been a senior).

What if I had stuck it out?

Would my dream of going pro come true?

What stings is that the dream ended not because I wasn’t good enough but because I quit.

Coming home led to me starting my first agency.

I am delighted with what my life has become.

And I have new dreams.

But I can tell you this, if I don’t reach them, it won’t be because I quit. 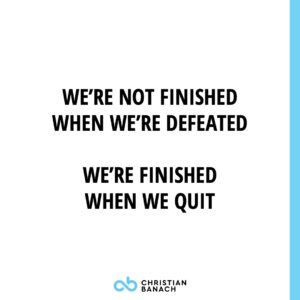